By 1970 Kevin had teamed up with Dave Cooper, another Coventry guitarist, to form their first band, Dando Shaft. After recruiting multi instrumentalist Martin Jenkins, Roger Bullen on bass and Ted Kay on percussion, they produced, An Evening with Dando Shaft. It was the first album of four they were to make. Kevin was writing music and lyrics, not realising that his singing voice would be something that would be really special and unusual. After that first album they decided to add a female voice. Kevin says:
“There was only one choice – Polly Bolton.”

From the mid 1960’s Polly had been working with June Tabor, singing around folk clubs, and later went on to join the Albion Band.

Dando moved to London, and Kevin, whose guitar playing was becoming recognised, was asked to join the Anand Band to add another guitar to that of John Pring.

They toured India and played in the huge Ram Lila Ground in Delhi,but by 1973 Kevin had moved to a big band, Blue Aquarius. They toured America including gigs in a number of prisons in Texas, Alabama, Oklahoma and New Mexico. The whole band settled in Houston for a year before on moving to Los Angeles. 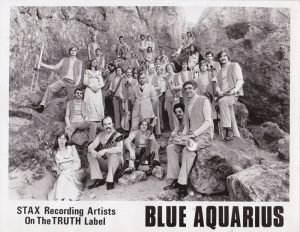 “It was incredible to get some experience with Latin music – stuff like Sambas and Montunos that I’d never played before.”

Around 1974 multi instrumentalist Alice Coltrane was living in L.A. and became familiar with Blue Aquarius.

“Alice enjoyed bringing her arrangements and compositions to an existing big band.”

And the fast pace didn’t stop! The next change was to a Motown sound when Kevin accepted a job in the band for the UK/Europe tour of Percy Sledge. He was hankering for home and this provided the opportunity. Later on Kevin did a similar tour with the Marvellettes. 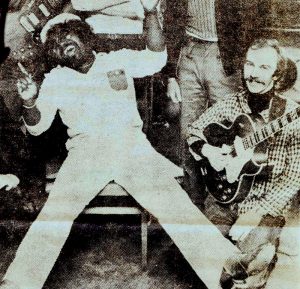 By 1977 Kevin was established back in the UK touring Folk clubs with Polly Bolton. The year after, Kevin joined Side Effect alongside Paul Brook on drums, who he knew from the Percy Sledge tour. Kevin and Paul both soon moved on to another jazz/funk band Pzazz with Steve Tatum on sax, bass Mark Yates and keyboard player Mark Steeds.

“They needed a guitarist and asked me. Great musicians! I was playing a Gibson ES295 at the time that I’d bought from Alex’s Guitar Shop in New York.”

If you search really hard you can still find a YouTube clip of Pzazz in 1980 – including a moustachioed KD!