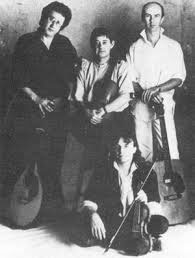 In 1981 Kevin had a phone call from the manager of a vocal Soul group called Delegation. They needed musicians for a two week tour of Nigeria and, up for any new experiences, Kevin agreed – certainly one he’ll never forget!
In 1983 the already almost legendary fiddle player Dave Swarbrick left Fairport Convention to form a new acoustic band, Whippersnapper, and asked Kevin to join him. He was reunited with old friend Martin Jenkins, now playing mandocello. Since Dando Shaft, Martin had played with Hedgehog Pie, Matthews Southern Comfort and Bert Jansch. The fourth member Chris Leslie’s background was as a musical instrument maker, but joined the band playing fiddle and mandolin.

Whippersnapper was described as Progressive Folk (depending on which reviews you read) but all four members were very accomplished and experienced musicians, and to some fans the band was thought of as a Folk Supergroup. In their time together they toured extensively, visiting Europe, USA and the Far East, as well as every corner of the UK.

They released four albums; Promises in 1985 followed by Tsubo in 1987. These Foolish Strings was a compilation of live recordings and produced in 1988, and the final one, Fortune, at the end of 1989. At about the same time, Dave Swarbrick left the band to work with Martin Carthy and subsequently with Roy Bailey’s Band of Hope.

Whippersnapper continued as a trio until 1995 when Martin was preparing to move to Bulgaria. But that wasn’t the last to be heard of Whippersnapper as they reformed to tour in 2008 and 2009. 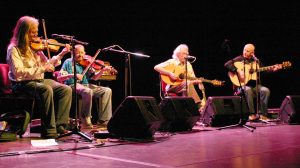 Kevin and Chris Leslie continued to work as a duo and released an album, Always with You in 1996. A few years later, Kevin bumped into Mike Harding (Radio 2) who told him that this was one of his all time favourite albums. 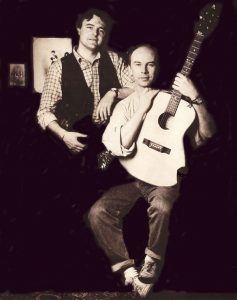 “When playing with Chris I mainly used an Armstrong guitar – a beauty! Sometimes I changed to a Takamine Jazz Limited Edition that I’d fitted with a midi pick-up, enabling me to play some pads and samples.”

In 1987, whilst still with Whippersnapper, Kevin was offered a solo tour of Italy by Gigi Bresciani who was a big fan and also a booking agent. The tour was a success and the partnership still exists today. The solo performances grew between and around the collaborative work, are very popular and take up a lot of Kevin’s current time.