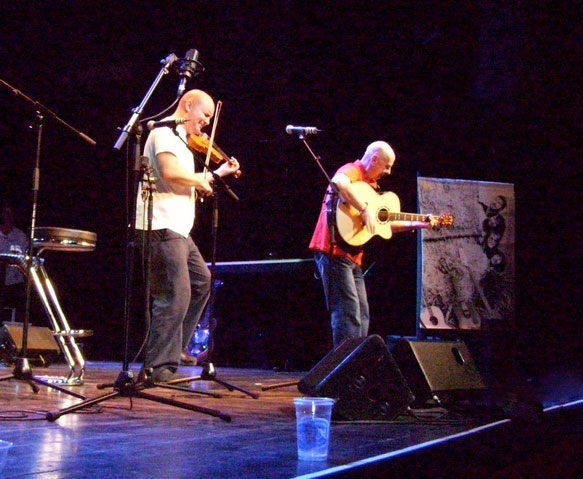 In 2000 Kevin had a call from Joe Broughton asking if he would like to meet up for a play.

“I remember meeting Joe at a Whippersnapper gig at Burnley Mechanics – I think he was 14 then. At the end I was talking to him and his older brother (guitarist) Ben, and Joe said that he had been playing violin since he was five years old. I borrowed Chris Leslie’s fiddle and asked Joe to play something for us. I couldn’t believe it, he was truly amazing!”

In 2000, as Dempsey / Broughton, Kevin and Joe made an album, Every Other World, but it wasn’t until Joe left the Albion Band in 2003 that they started touring full time, taking Folk / World music around UK, USA and Europe. The second album, Freehand, was released in 2004. Although over subsequent years they have followed different paths, they still slip easily back into working together. They have released their third album Off By Heart and have established an annual tour each February.

Whilst working with Joe, Kev also joined forces with two long term friends Tom Leary (Little Johnny England, Humble Pie) and Peter Knight (Steeleye Span) to form the trio Tanna. Kevin had done some writing and recording for Tom in the past but had never worked with Peter. 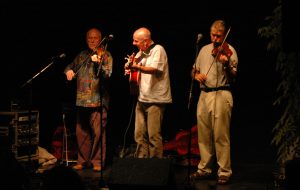 “Three old blokes together – it was great fun!”

In the first half of 2000, Martin Wyndham Reid (Song Links Project) was running residential music courses at his house in France, engaging different musicians to teach each week. By then Kevin was a well established summer school tutor and Joe Broughton was teaching at Birmingham Conservatoire. When Martin retired, Kevin and Joe moved on to Creative Vacances in the delightful La Moreau, where they continue to teach for a week each summer.

Throughout Kevin’s career musicians have called him to join them knowing that his exceptional musical versatility enables him to fit into and enhance their sound. Mary Black was another of those who phoned Kevin out of the blue in 2004. Her regular guitarist was temporarily working elsewhere so, as a one tour deal, Kevin stepped in for a series of gigs in America.

“Mary had heard a track called Once I Loved that I’d recorded with Joe Broughton on our second album Freehand. She wanted to sing it as a duet, so every night of the tour I had the pleasure of singing that song with Mary.”

Whilst teaching at Folkworks in 2005, Kevin met young fiddle player Anna Esslemont who had recently started working with Irish percussionist Cormac Byrne in a duo they called Uiscedwr. As ever, eager to support young musicians, Kevin agreed to play a few gigs, but actually stayed for four years and went on to make an album called Circle.